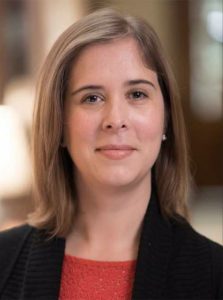 Dr. Amy Janes has officially joined the NIDA IRP as a new Investigator within the Neuroimaging Research Branch (NRB).  Dr. Janes will lead the newly created Cognitive and Pharmacological Neuroimaging Unit where she will build upon her highly successful clinical and translational work that includes investigations of comorbidity between SUDs and mental health disorders.

Dr. Janes joins us from Harvard Medical School where she served as an Associate Professor of Psychiatry as well as the Director of the Functional Integration of Addiction Research Laboratory at McLean Hospital.  She earned her Ph.D. in psychology in 2007 from Boston University and completed her undergraduate work at Rutgers.

This past February Dr. Janes was named the new President-Elect of the College on Problems of Drug Dependence (CPDD), which is the longest standing group in the United States addressing problems of drug dependence and addiction.

Dr. Janes is an innovative researcher whose long-term goal is to help inform the development of personalized treatments for substance misuse that consider differences in brain function and other factors, such as coexisting psychiatric disorders.  We are extremely excited for the promising contributions that Dr. Janes will bring to current research portfolio of the NIDA IRP.